Wisdom From My Momma 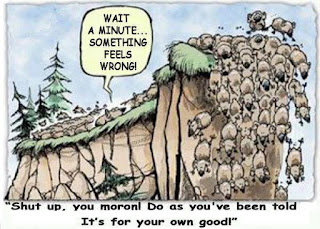 When I was little a lot of times my argument for something would boil down to me stating "Its what everybody else is doing or saying" or "Everybody else was acting up or nobody else did it right either". My mom would simply say "If everybody was jumping off a bridge, would you jump too?".
You see my parents raised me to live a certain way, as probably most of your parents did as well. That way was supposed to be based on the Bible, and the life of Jesus. In addition they encouraged me to not just know that way, but to have the courage and strength to follow that way even when others around me didn't.
Now this lesson went beyond just not cussing, listening to your elders, treating people kindly. They also encouraged me to strive to do and be my best. Even when people might call you a nerd, or tell you its okay to slack off or that you were doing enough, my parents said "You can do better". Those words of wisdom have made me the man I am, and I am so thankful for that encouragement.
Learning that I need to do my best despite and sometimes in spite of my surroundings is a cornerstone of my life now. Yes I am not immune to group think, and it is still so easy to feel like you have done enough or so much when you compare yourself with person X.
That is really the reason why I am sharing this with you all. Its to encourage everyone to look introspectively at your own lives and make sure your living up to your potential. Ensure your not just following along with the crowd your around, and not exemplifying the values you profess. Don't live to be just a little better than person X, or do things because of what this other person does, or in response to what they do.
If your about LOVE question things and people that are about and only speak of HATE. IF you want to bring people together, UNITY, question those that only want to separate, DIVIDE. You want to be smart and have KNOWLEDGE, then don't be fooled by and stay around those that dwell in IGNORANCE.
Its easy to just think about the people in that other part of the world. That other country over there. That other part of our country. That other state, that other city, that other neighborhood. Whats hard is the people right where you are and who your with on a daily basis.
I need to do and be better myself so this is not to talk down to anybody. Please pray for and encourage me to answer the " Higher Calling" and I will do the same for you. Lets keep each other from going off the cliff. Together we can be better and the world around us will have no choice but to do the same.