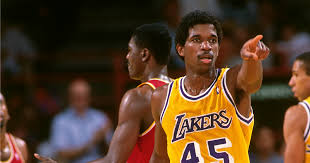 I was just thinking about my childhood, and something that was a big part of my life this time of year, playing basketball in the Hobby Shop League. The Hobby shop is church sponsored organization in Nashville. They have a couple of facilities where kids can do activities, learn, and they have a big gift giveaway every Christmas for underprivileged kids. They also sponsor a basketball league that not only teaches kids about basketball, but has devotionals every practice and tries to put some Jesus in their lives.
So as I was saying I was thinking about my position back then. I played probably five seasons between the age of  10-17. Some were seasons where I was the worst person on the best team that didn't lose a game, and some years I was the best person on the worst team that lost every game. I tell you what, I learned a lot about life and teamwork playing in that league and it will stick with me forever.
Now when I was about 11 or 12, I was tall for my age, so I played mostly power forward and sometimes center. I would like to say at this point that was my last growth spurt up. I have probably been the same height ever since then and any spurts after that were horizontal instead of vertical. This has haunted me latter in life as I was no longer tall so people thought of me as a guard, and I quickly disappointed them with my ball handling skills.
Anyway I have never been athletic. I have no special God given talent or skill in sports, or maybe anything else for that matter. People laughed at my dribbling skills, or lack thereof, during high school. I'm talking about you Chris wherever you are for calling my crippled left hand. I'm just very right hand dominant!
One thing I could do was listen to coaching and I always had the team mindset. I wanted the team to do well, even if we didn't win or I didn't score. When I learned the half court press or stacking it up on the pass from out of bounds, I was so happy when we executed it right. Even double teaming and forcing the turnover, even if I didn't get it on the fast break I was excited that we did it. Now no doubt I was super excited when I scored or blocked a shot and winning championships and being voted on the all star team was nice. Still just playing together and executing was what it was all about.
So I got to thinking how me on the court then is me in life now. I am and will always be the power forward. A position that doesn't usually get as much attention as the guards with their great ball handling skills and shooting ability, or the center who swats everything and dunks on everybody.
When I was young I would get in there and put a body on whoever got close to rim no matter how much bigger and taller they were than me. I was timing my jumps and crashing the boards anytime something came off that rim. Since I couldn't dribble I was always looking to get it to the guards. Every once and a while I would get a rebound and put it back. Sometimes I got fouled and got some points on the line. Matter a fact a free throw was the first point I got in a game, and I still remember how happy I was when it went in. I think I had like 5 points that game and I just couldn't believe it. Kinda glad all the good players couldn't play that game, gave me and the other bench riders a chance to shine even though we got blown out.
In much the same way as on the court I will get big with whatever situation and whatever person in my life, to help my team win. I may not have the best skills or knowledge, but just like basketball I'm going to show up to play every game in life. By game I mean showing up for work everyday. I also don't need the glory and am more than willing to make the outlet pass so somebody else can score. I'm going to play the same no matter if I'm on the best team or the worst, which I seem to end up on a lot. Just kidding group 3 your the best no matter what the stats say.
I can't thank my parents and the coaches I had back then enough for teaching me the values of teamwork, and doing my best. I would have become a very different person if I hadn't learned those lessons, and I pray that I can live up to the standards that were set for me so long ago.

P.S. That is AC Green for those wondering about the picture. Maybe could have been me if I kept getting taller instead of fatter.