April 15, 2018
So me and my family used to watch Siskel and Ebert when I was a kid, and always liked to hear what each person thought about a movie they watched. Sometimes they saw things completely different, and its amazing how people can see things so differently. I must also add in that me and my brothers also used to get a kick out of Mystery Science Theater. Those robots would have me rolling, and those movies they watched were so bad I couldn't believe they sometimes had legit stars in them.
Any-who, I just thought I would share some thoughts I have and some that I have heard on a few movies. Lets start with an odd childhood favorite of mine. 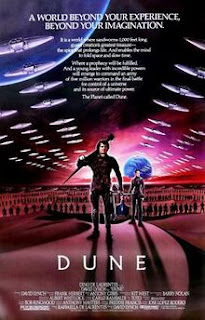 So when I was a child in the eighties this movie was just so weird in a scifi way that I have always loved it. I had not read the books back then so I had no idea what it was all about. I have since read many books in the series and have seen the SYFY channel mini series, which are much better, still I love this movie. The acting is a little over the top and dramatic, and the special effects not that great at times, but still it is visually and conceptually stunning to me. The movie just tried to tell too huge of a story in three hours that needs probably like ten. They squeezed it together and changed some important things, and still made a very long weird sci-fi space soap opera that is a mess for some and a cult classic to others. By the way my family jokes on me all the time for liking this movie, so I must really like it to have endured their harassment all these years. Next a comedy favorite of mine.


O'Brother, Where Art Thou? 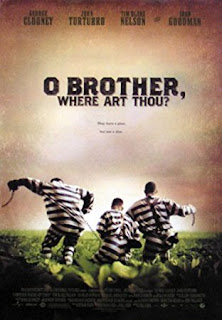 I may later do a post just on my childhood funny movies, but hands down one of the funniest movies I have seen in my adulthood. Might be cause I'm from the south, or because I grew up hearing the type of music in the movie. I just loved the singing, the jokes, and the way people played the characters.Some of the actors seem totally different when you see them in other stuff, which shows how talented they are. Just watched it recently and in some ways I think some stuff is still the same. Sometimes politicians do things like play the harmonica at get togethers, and you forget about things like them and a prostitute in Knoxville. Just saying music can still make a difference in getting the "Constituency". Also I always tease my mom about the "miscegenation" in her heritage. She says it sounds so bad when I say it, and maybe it is inappropriate to use it in reference to having a mix of races in your bloodline. Its just a funny sounding word so I'm sorry mom, and I'll try to do better. Next a couple of more current movies. 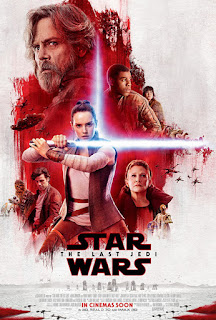 So I am a huge Star Wars fan. My family is also which may be why I am, I don't know if its nature or nurture. Anyway I have heard a lot of criticism on this movie, and in particular its director Rian Johnson. My brother is just relentless in his hate for this man. Its probably led him to the darkside. Joking for those who didn't know "fear..., anger..., hate..., suffering... leading to the darkside", but if your reading my blog you probably are a dork like me and already know such things. Any way as a fan I was disappointed in this movie. Part of me is trying to reserve judgement in hopes that later movies will explain some things, but come on Rian you just kill Snoke with no explanation of anything about him. Leia just Mary Poppins herself back to the ship with no explanation of her force powers. Those who read the old books, which are no longer cannon by the way, know she had force abilities, but the movies don't show her doing anything. She showed some heightened intuition, that is about it. All that stuff at the casino was just such a waste of time, and the stuff with Po having a mutiny just felt forced and unnecessary. My overall opinion is the movie wasn't horrible, but it was wasted potential after what the Force Awakens started, or should I say remade. You know what I'm talking about. Hopefully the chosen one, JJ Abrams (aka jr. Spielberg), can restore balance to the force. Lastly one of the best movies I have seen in a while. 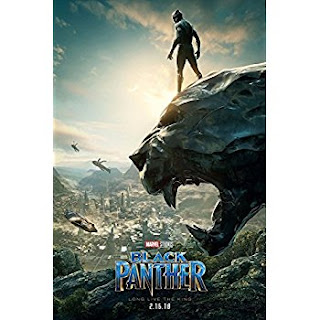 I am a huge Marvel fan, DC sucks, and this is probably the best one they have done. I was just kidding about DC, but I do prefer Marvel, its just better. Whats good about it, really the overall movie. It was visually stunning, had good action, but one thing to me made it stand out from other marvel movies, story. To me the story was better than what they have done in other marvel movies. The bad guy was actually legit. His story and reasons for what he was doing was conceivable, just like the conflict with Wakanda staying isolationist or helping the outside world. I felt like this movie got me invested into the characters and what was happening, it wasn't just generic story lines mixed in between action sequences and explosions. The character Black Panther wasn't really one of my favorites growing up, so I was pleasantly surprised to feel the connection to him, and I think it was because of good writing, directing, and acting.
Now I can't talk about this movie without saying something about some reactions I witnessed. So one being that people took this as a black thing to the exclusion of white people. Something that only black people should and could appreciate. No this movie was good for all people to see, and all people should wish they lived in Wakanda, if it were a real place. I also heard people say they had apprehension in seeing it because it was something political. Just because it was a movie about and starring black people doesn't make it political. The character and where they come from is a black place, its a comic book read it. Either way people get over yourselves and go see the movie because you like superhero movies. If you don't like them then don't see it and just know you missed out.

Hopefully you enjoyed my movie critiques. Let me know what you think and if you like or hate these movies and why. Much like Siskel & Ebert, later Ebert & Roeper, its just opinions. If people like this post maybe I'll do some more in the future!