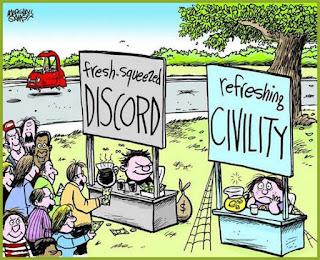 So I was not aware of the whole controversy over the Native American demonstration in DC until yesterday, and I am glad. Glad because yesterday I got to see more of the picture of what went on. Far too often people get on here and pick some side without knowing what happened. It doesn't hurt to take some time and let things play out before rushing to judgment.
Now what I want to express today is my view of the situation in hopes of bringing back some civility to our discussions in real life and here on the Internet. First off I must say this, I am just a man, I am not perfect and nothing I say on here is divine truth. This is opinion that I base on my observation and the values I believe in. So here is my take.
The Native American group had a permit and was there to peacefully express themselves. Anyone in the area should have gotten out of their way and allowed them to perform. The group being labeled as black Israelites were there as they probably are every weekend exercising first amendment rites. I use to be in DC and have met them and read the literature they gave me about the twelve tribes. Truthfully it may not even have been black Israelites but regardless of that, what that group was saying to those children and people gathered in that area was abusive, bigoted, and hateful. That kind of public lack of civility, promotion of violence, and hate mongering has no place just as it doesn't with the alt right and hate groups that march, chant, and promote racist ideology. They should be always be denounced publicly by our society and it's leaders. The children from the Catholic school gathered there, who were in town for something else, got involved in something they shouldn't have, and whatever they were in town to do will forever be overshadowed by there poor decisions. They were being at the minimum childish, but also possibly antagonistic, condescending, and disrespectful. Yet I don't put much blame on children. Their adult chaperons are to blame as they should have been there to guide them and set a better example. Honestly they should step up and take responsibility for what unfolded.
So many of us claim to be Christians, which means you follow Christ, but instead we are conservatives or liberals first and follow a political ideology. We are all free to be on whatever political side, but I just want to bring something out for those of us that are Christians. Jesus did not say blessed are the race baiters, the loudest talkers, the argument winners, the grand standers. No he said blessed are the peacemakers (Matthew 5:9). He did not say hate or make fun of your enemies or people not like you, no he said love your enemies and even pray for those that persecute you (Matthew 5:43-48). The best example anyone gathered there could have done was to come together and pray for each other. Pray for the people spouting hate that they might turn from their ways. Pray for yourselves so that you don't have hate or do anything that could be mistaken for hate. Pray for this country so that its leaders don't support hate. One of these days true followers of Christ are going to have to start following his ways, which are of love and unity, or hate and division will continue to win.