Your silence speaks louder than your words 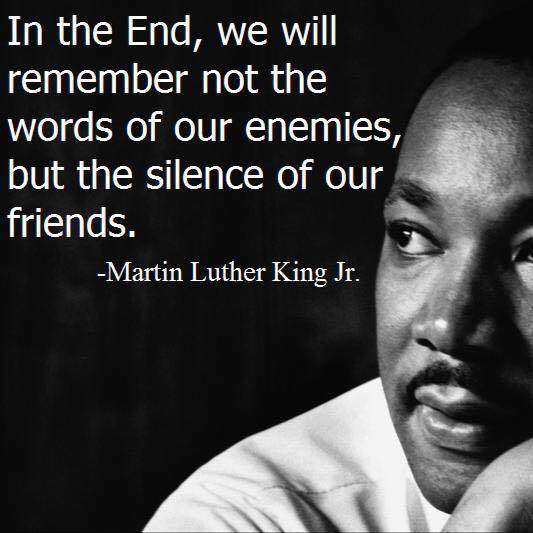 So its MLK Day and I happened to hear this quote and it struck a nerve with me. I find it to be very true in my own life. It hurts me deeply that people who say they are my friend, and to an extent even family, will talk all day about certain things and remain silent on others. Now I get it, we don't know everything, we are not up to date on every situation, some things affect us more personally than others. I guess maybe that's why it hurts, because I have watched as so called friends placed things ahead of me that I thought would not have been.
Now I am not the most important thing in this world. Please do not mistake this as being about how I am greater than everything in your life. I would never ask people to place me before their husband/wife, children, mother/father, roof over their head, or food on their table. I am not at all necessary for any one's existence. I live to not depend on anyone but the Most High, and as far as I know I have no dependants, so the world will keep going on on just fine when I leave.
Like I said personal things cause us to be more vocal. I am currently around a lot of people who are worried about someone taking their guns away. So I get that it is going to be a topic of conversation as people discuss things that might affect their second amendment rights, because they believe that to be of utmost importance. Some others are worried about school and society indoctrinating their children to not believe in Christianity, and again its going to be on their lips. Me myself, issues of race, feeling like an underdog, crime and violence, my interest in writing books, these can all be at the forefront of my thoughts because of my life experience. It is nothing but human to be this way. We want to talk about things that worry us, things that personally affect us and the ones we love, things that maybe we think haven't gotten enough focus.
So am I asking for people suddenly to drop everything and focus on the problems with race in this country? Maybe we should forget about prayer in school and shift all attention to making sure they don't come in my house to take my guns. Forget that we are running up huge national debt, no lets all just talk about how good UT will be in football next year. You might laugh but some people spend all day on sports teams twitter feeds, and that's all they want to discuss.
No what I'm saying is take some time for reflection every once and a while. Think about what and who you have prioritized in your life. Think about others and how things may be important to them that's not that important to you. Don't change yourself or your opinion to fit them, just walk in their shoes a little bit, and consider why something is important. Maybe if we openly share and discuss we could learn and see why something could be important or maybe not that important when we think about it.
Now I couldn't write this without sharing the truth on something. In 2017 when the incidents in Charlottesville, VA took place I was hurt by people around me and their response or lack thereof. Some only wanted to talk about the opposing groups fighting. Got that, it was true that people were fighting, some guy had a homemade flame thrower he used, another guy shot warning shots with his gun. All who broke the law should be arrested and sentenced. The thing is more than just that happened though. Completely innocent people were mowed down and many of the vocal people around me that call me friend were completely silent on the loss of life that occurred. More than happy to express their political agenda with the situation, but couldn't even acknowledge people losing their life for not sharing the same political philosophy. So that silence spoke very loudly to me then and still does now.