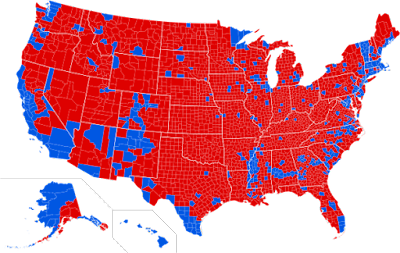 So hopefully the picture and title got your attention. This map breaks down how areas voted in recent elections. Blue democrat and red republican. Not a clear north and south like before, but that won't make a difference if we can't resolve issues that divide us to the point of hating one another. One reason that I think we could find ourselves at war with each other again is because we haven't yet solved our issues on race. So here is something I wrote a while back as part of a series on race in this country I wanted to do and never posted. Since lately I've heard some people talk of the division in this country leading to another civil war I have re-purposed this post as thoughts on how we could avoid such a catastrophe.
America faces many issues, but in particular we have had issues with race. Things from the past still affect things today, and whether we acknowledge it or not its still happening. I have come to believe that we still have issues with race because we have yet to apply the wisdom of Jesus teachings, in particular his call for repentance, for it is the key to change. 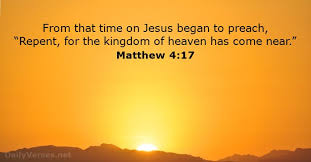 You see people haven't repented of their thoughts and actions with regards to race. Some just stop saying or doing certain things, at least in public, but inside our hearts and minds have not changed. We haven't said or felt we were actually wrong or that other people we respect and venerate were wrong in the past, and we therefore feel no remorse or regret. We still can't truthfully see each other as just humans, or more importantly, as children of the MOST HIGH. We can only see race in everything, and we let that one thing drive us apart. We still think that skin color determines who we are instead of the content of our character.
When you accept Jesus you turn from your old ways and become a new person. For America to change to the new person, the better person we should be, we must repent for our past and present racial issues. We need to speak it out loud and confess it so that it no longer burdens us down. Admit to yourself things you have said and done, and soon you will change.
Once we repent we will become a nation of new people who, despite our differences, will work together for the common good. We won't be quick to judge every situation by race. We won't only associate with people because of race. We will be concerned when there is tragedy and death with all people not just our own. We will stand up when anyone is wronged, not just our ethnicity. I say it is time for us to repent. Time to change before we come to a point of division in this country that leads us to another civil war. We can still choose to repent our ways or be doomed to repeat the past.