LET ME SPLAIN THIS (Track & Field) 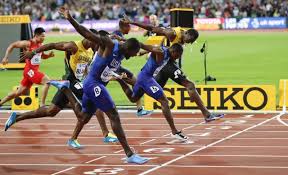 First off congratulations to Justin Gatlin for bringing the world 100m title back to the USA! A great day for the US and for TN with two former Vols, Gatlin and Coleman, taking gold and silver! I know some are still hatin on Gatlin for his past performance enhancing, but this post is not about defending him so I wont speak on that. I may later dedicate a post on him and performance enhancing in general.
This post is really just to talk about the sport I love, Track & Field. It is a very misunderstood sport, and very underrated, especially here in the US. Right now the World Championships are taking place in London, and once again NBC and the USATF are trying to promote the sport to the american audience. I for one wish they would stop trying, because their attempt is a negative for true fans. True fans love it for what it is, and not what it lacks compared to other sports. True fans check sites like TrackandFieldNews all the time to find out whats going on. We understand the metric system so stop trying to convert everything to feet and yards.We know who the top people are and what the best times are, so stop trying to push certain narratives on us all the time. Just because you decide certain people might attract a bigger audience you push them instead of the ones who are running well and should be highlighted. Just because you want to make someone a household name doesn't mean they are going to come through and win to fit your narrative. Call races as they unfold and not how you want it to be.
I am so tired of watching the announcers on US broadcast focus on people who aren't even close to winning and then when someone they didn't even see comes through they are shocked. Its not shocking when someone who's been running well all season does well at the championships and someone that hasn't run well all year, but you want them to win anyway, doesn't. These announcers are supposed to be professionals, so they should invest the time to know the facts of the sport and not just read off crap written by executives who think track only matters every four years at the Olympics.
So LET ME SPLAIN THIS so people understand. Track is run all over the world, all the time every year, in different conditions. Meets at high altitude have thin air so sprinters will have faster times and distance will usually be slower. Sprint races with a lot of wind pushing them will be faster than if the wind was still. The surface of the track and the temperature outside will also affect the times. Comparing performances is more than just who has the better time (Track) or farther distance or height (Field). This is why we have championships to bring the best people together and have them compete. The one that wins is considered the best. This fact disregards someone beating that person before or after, or having a better performance before or after. That competition that day is what crowns the person the best in the world. The 100m champion is crowned the worlds fastest person. The Heptathlon/Decathlon champion is crowned the worlds best athlete. This is what track and field is really about. Usain Bolt is the fastest human, unless someone breaks his records, but as of now Justin Gatlin is the world's fastest man.