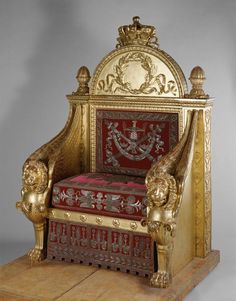 With OBERON'S time on the throne coming to the end, new candidates rose to challenge for leadership of the empire. On the Progressivist side a successor had been named. A woman named CLAHNA believed she was ready, and that the Empire itself was ready for its first female Supreme Leader. Still challengers came forth to say they were a better choice. Some of these people claimed that it was time for the Empire to go much further and totally abandon tradition. The young flocked to these people with promises of a utopia that they had been indoctrinated to believe was not only possible, but was inevitable. Their passions did not equal power, and the new people had to bow down and accept the chosen successor.
On the Traditionalist side a multitude of candidates came forth. Each one believing that the Empire was tired of the Progressivist doctrine and ready for a return to the old ways. Many of these candidates had been part of the ruling class, yet an outsider usurped all of them. A man of great wealth named DUPEL overshadowed all of the others with talk of returning the Empire to its past glory days. While others tried to have the civility that was expected of the contest, he instead attacked his opponents with merciless precision, calling into question their failures in life and inability to defeat the Progressivist. Opponent after opponent tried to convince the people that DUPEL was bad for the Empire, but they lost and were forced to bow down to him and accept him as their contestant.
Now in past times CLAHNA and DUPEL had been friends. Both had spent much of their lives in the same circles, living and thriving in the upper echelons of society. Both were very accustomed to wealth and having superiority over the common folk, yet both tried to appeal to the common people as if they were one of them. Most of the people in both parties paid no attention to either of their candidates backgrounds. Most were unable to see how CLAHNA and DUPEL both saw themselves as above the common folk. Most could not understand that despite expressing different political ideologies, both still held the same mentality of knowing better than everyone else and that all needed to just follow them without question.
Indeed that is what happened and throughout the election process Progressivist and Traditionalist stayed true to their candidate no matter what scandal or controversy arose. At a low point in the contest, CLAHNA spoke of Traditionalist as being of "poor quality" and "deserving condemnation". This did not endear her to Traditionalist, and she lost any chance of reaching those on the other side who considered voting for her. In her calculation however she did not need their support to win. Also at another low point DUPEL was accused by multiple women of being unfaithful to his wife and treating them disrespect. He was unapologetic even going so far as to say as he could do no wrong to the point that he could murder someone in broad daylight and his followers would still vote for him. Both candidates lacked humility, a trait which used to define the people of the Empire, especially in the southern part of the Empire. Yet those people in the southern part of the Empire, who claimed to be the most ardent followers of the Empire's chosen religion, ignored the tenants of their faith and instead placed their trust in the two political parties.
After a long fight filled with passion, fury, and at times hate, the Traditionalist candidate won by the rules of the election. Still their was dispute over the outcome as the Progressivist candidate had won more votes from the general population. A crisis was avoided however as the law was clear on the way the Supreme Leader is elected, though many Progressivist steadfastly believed they were cheated and vowed to never recognize DUPEL as their leader.
A new era began and the Empire remained divided, with half again looking to the throne with disdain and the other half worshiping at its feet.