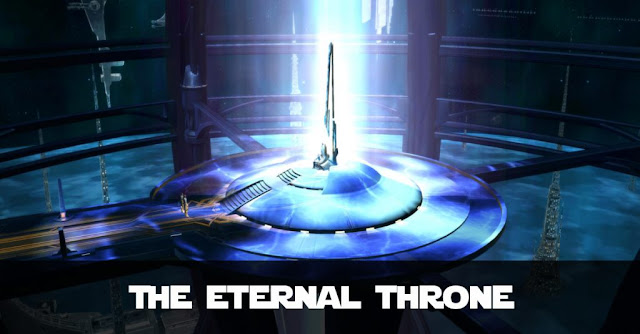 A new era was at hand under Supreme Leader DUPEL. During his reign the empire continued to prosper. The TRADITIONALIST embraced this prosperity as a sign of the righteousness of their beliefs. They spoke only of what they gained now in this era, ignoring how they had already been prospering and gaining under the leadership of OBERON. During his reign they had felt oppressed and now they felt overjoyed and wanted to erase anything that reminded them of OBERON's reign.
On the other side the PROGRESSIVIST cried out openly, fearing that all that they thought they had gained under OBERON would be lost, ignoring that they continued to prosper despite the change in leadership. They expressed anger on occasion and tried to unseat DUPEL at any cost. Some of them even resorted to the same unfair tactics and closed mindedness that they had accused the TRADITIONALIST of having during OBERON's reign.
So the Empire remained bitterly divided. DUPEL attempted to address longstanding issues on trade and security, but was disheartened when he did not get his way. The PROGRESSIVIST tried to oppose him at every turn and some in his own party even had the courage to stand against him when they felt he was not making the best decision. In his time before becoming Supreme Leader, DUPEL had been in business, where he experienced great success as well as failure. His bad decisions were covered over and he did not suffer for them. Now his decisions affected the everyday lives of the people of the Empire, and many wondered if DUPEL could rise to the occasion and think first of others. The things he decided now could hurt the people for generations. Some were so in fear of this that they plotted to overthrow him by legal means.
The government of the Empire remained deadlocked on many issues and spent more time fighting with each other than working for the people.Yet the Empire still prospered and life went on. This was the truth throughout much of the Empire's history though few would acknowledge this fact. To many put their hope in the Supreme Leader or other government officials thinking that those people alone make or break the Empire. Not enough thought was given to the impact that the actions of the everyday citizen is what keeps the Empire from collapsing.
Now after a few years time elections were called for again in an attempt to unseat the Supreme Leader. A great many candidates stepped forward for the PROGRESSIVIST exclaiming how they alone could defeat DUPEL and they alone had the vision for the future of the Empire. The TRADITIONALIST were united in their support of DUPEL, wishing for him to remain on the throne. Some among them even felt that the HIGHER BEING had decided DUPEL should lead them forward, and felt a religious mandate from above to support and defend him no matter what.
It was finally during this time of division and purported coup attempts and rhetoric of conspiracies from both sides, that a few among the population rose up. They came from the TRADITIONALIST, the PROGRESSIVIST, the INDIES, and from groups who abstain from politics. This new group said with one voice that it was time to return to the foundation of their beliefs, which calls people to unity not division. They called for the citizens to remember the HIGHER BEING, and how he called on his followers to "Love your neighbor as yourself" to "Love your enemy not hate them". They reminded the people that their spiritual life was more important than this physical world. Gaining wealth, power, popularity, fame paled when weighed against being spiritually poor and broken which leads to eternal damnation. No Supreme Leader or political party was more important than following the HIGHER BEING became their battle cry.
Soon the small group that spread these ideas began to grow as more people realized they were spending too much of their life focusing on the things and ways of this world. Many began to stop writing and talking about politics and began to read and embrace the ways of the HIGHER BEING. Instead of fearing others, people began to try to work to love and understand each other no matter the differences.
People voted for who they thought would be a good Supreme Leader based on their own conscious and beliefs, but the majority of the citizens no longer let that determine their lives. People went about helping each other and trying to not just make their own lives great but everyone's life great. Soon the government shrank in size and power as communities took responsibility for each other. No neighbor was a stranger anymore and no one went without food or shelter when the people decided to share what they had with each other.
Before long no one worshiped at the throne of the Supreme Leader anymore for they all realized that just as OBERON had his time and then fell off, so then did DUPEL have his time and fell off, but all could worship at the throne of the HIGHER BEING for his throne is eternal and he never falls off of that throne!